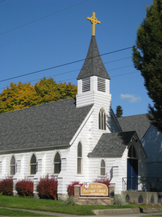 St. Luke’s began as a true frontier church. We don’t know any stories about cowboys riding their horses down church aisles or shoot outs down the street, but they may well have happened. Idaho was still a pretty wild place when a group of Episcopal officers began meeting in the 1880’s, most often in their quarters at Coeur d‘Alene’s Fort Sherman.

Initial Episcopal services were random gatherings; the first official service appears to have been held in the Odd Fellows Hall, led by a candidate for the priesthood, Fred Sellick, in September, 1891. Accordingly, St. Luke’s is celebrating its 125th anniversary in September of 2016. We believe we are the oldest continuously operating Protestant church in town.

Construction of the church building was begun that same fall on donated property and the first service occurred in March of 1892, officiated by The Rev. Herman Page. The current building, at 5th and Wallace in downtown Coeur d’Alene, was expanded in the first decade of the twentieth century and has served this active congregation over all of those years. There have been several additions to the original building and everything has been modernized, of course, but church goers still sense a lot of history whenever they enter the front doors. St. Luke’s has a long and proud history.

This year we are enjoying our 125th anniversary. Take a look at some of the pictures from our event held Sept. 17, 2017.